On Tuesday 5th July 2016 PhotoAccess will host a free darkroom access day to commemorate the anniversary of Huw Davies’ birth. Huw Davies (1954-1994) was a significant contributor both to PhotoAccess and to documenting and developing community in Canberra during the 1980s. Selected works of Huw’s are included in The Bends exhibition, which is currently on show in the PhotoAccess Huw Davies Gallery.

Curated by Claire Capel-Stanley with Lucy Caldwell, The Bends explores alternative photographic processes through the work of six artists: Robert Agostino, Claire Capel-Stanley, Huw Davies, Nicci Haynes, Matt Higgins and Ben Lichtenstein. Instead of a flight from progress and digital technology, this exhibition explores the ‘alternative’ more broadly as a legitimate and powerful facet of the contemporary.

PhotoAccess was established in 1984 to serve the ACT community by providing the inspiration and means for people to develop and create their own cultural statements through the photo-based arts: encouraging the use of photography to achieve personal and political growth, and providing affordable and accessible facilities. Times and technologies have changed and with them PhotoAccess has adapted and matured, while remaining true to its founding objectives.

PhotoAccess hosted a survey exhibition of Huw’s work in 2008 titled Huw Davies: Everything under the sun, curated by David Chalker (Director PhotoAccess 2003-2014). In his exhibition essay David outlines the history of PhotoAccess, and Huw’s involvement:

Following an initiative by Lesley Goldacre, a lecturer in photography at the Canberra School of Art, Huw Davies, Sue Ferrari, Sef Geale, Annie Jacobs, Margaret Newton and Kerrie Ruth established PhotoAccess (converting a derelict building in Kingsley Street Acton) with support under the Commonwealth Government’s Community Employment Program. Gerry Orkin, Babette Scougall and Iain Dawson were among others instrumental in the founding of PhotoAccess… From 1984 until he left for Sydney in August 1988 Huw was involved in all aspects of PhotoAccess; demolition, building and fit out work, as a member of the management collective, the editorial collective for the PhotoAccess magazine Against the Grain, as a tutor, supervisor, exhibition curator, project coordinator and artist. He continued his involvement until late 1992 through projects and as a contributor to group exhibitions and fundraising…. Huw Davies’ life took many interesting turns. Although PhotoAccess was a relatively brief stop along the way, it was a measure of his contribution to its continuing philosophy that PhotoAccess named its exhibition space the Huw Davies Gallery when it moved to the Manuka Arts Centre in 2002. 1 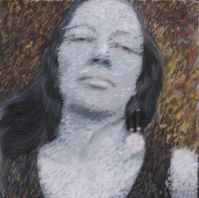 Below is an excerpt from the survey exhibition’s catalogue introduction essay, written by Denise Ferris (the then Chair of PhotoAccess and now current Head of the Australian National University School of Art and PhotoAccess life member), providing an insight into Huw’s work:

…The substance of the prints, the work of Huw’s hand and the amazing and diverse colour palettes applied, integrate with the grainy velvety dots of the silver photographic process. These photographs were brought to this marvellous conclusion without computer layers or software— the exceptional ingenuity and use of former techniques now surprising.

While these photographs do speak of another time, a place of people and community, shared darkrooms, acts of photographic playfulness and witness, they remain insistently beautiful, with an ageless allure that highly aesthetic work exudes. However Huw wished more than beauty for his photographs. He not only recorded but conveyed the important things—connection, belief and understanding, relation, thought and action, beyond the evident value of his friends, intimacy with others, nature and landscape.

Some black and white photographs were further invigorated by a multitude of strokes, eddying around outlines and blocks of tone, currents of colour. The areas of silver left plain tell a photographic story though their dots are no less imaginative. The glorious colourful marks are splendid over the surface of the yielding but insistently present photographic reality. Evocative and stirring, any poignant effect is restrained by their vital energy.

These photographs transmit Huw’s physical enjoyment in photography, its processes and its possibilities. Moving beyond direct representation Huw suggestively used darkness and light, chiaroscuro, as affective tools, and employed contrasting colours with resonant exuberance. The constancy of taking photographs, working at realising them, transforming their subjects and meanings, their planes, making them say things, making them irresistible, bringing them to sight, spending time over them declares a fascination. The photographs also served to unmask and mask Huw’s own self-image. What Huw saw, the shadow and the light, the latent possibility and another reality, his decorative application more truly a prescient mining of photographs for marvellous images… 2

All images featured in this post are from the PhotoAccess Collection, Huw Davies Archive (gift of Branwen and Jocelyn Davies).